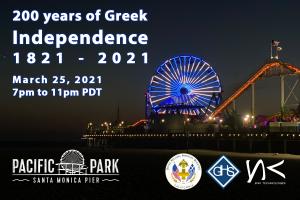 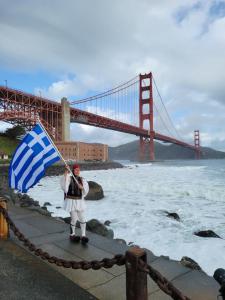 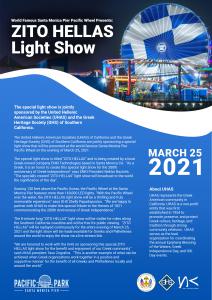 The special light show is jointly sponsored by the United Hellenic American Societies (UHAS) and the Greek Heritage Society (GHS) of Southern California.

If you deconstruct Greece, you will in the end see an olive tree, a grapevine, and a boat remain. That is, with as much, you reconstruct her.”
— Odysseas Elytis

SANTA MONICA, CALIFORNIA, UNITED STATES, March 25, 2021 /EINPresswire.com/ — The United Hellenic American Societies (UHAS) of California and the Greek Heritage Society (GHS) of Southern California are jointly sponsoring a special light show that will be presented at the world-famous Santa Monica Pier Pacific Wheel on the evening of March 25, 2021.

The special light show is titled “ZITO HELLAS” and is being created by a local Greek-owned company ENKI Technologies based in Santa Monica CA. “As a Greek, it is an honor to create this special light show for the 200th anniversary of Greek Independence” says ENKI President Nektar Baziotis. “The specially created light show “ZITO HELLAS” will broadcast to the world the significance of the day & the vital human right of freedom! The will of a nation for independence inspires generations ahead”.

Soaring 130 feet above the Pacific Ocean, the Pacific Wheel at the Santa Monica Pier features more than 160,000 LED lights. “With the Pacific Wheel over the water, the ZITO HELLAS light show will be a thrilling and truly memorable experience,” says GHS Shelly Papadopoulos. “We are happy to partner with UHAS to make this special tribute to the Heroes of 1821 commemorating the 200th Anniversary of Greek Independence.”

The 8-minute long “ZITO HELLAS” light show will be visible for miles along the Southern California coastline and will be free for public viewing. “ZITO HELLAS” will be replayed continuously for the entire evening of March 25, 2021 and the light show will be made available for Greeks and Philhellenes around the world to enjoy the show via a live stream link.

“We are honored to work with the GHS on sponsoring this special ZITO HELLAS light show for the benefit and enjoyment of our Greek community” said UHAS president Taso Zografos. “This is another example of what can be achieved when Greek organizations work together in a positive and supportive manner for the benefit of all Greeks and Philhellenes locally and around the world.”

About UHAS. UHAS represents the Greek American community in California. UHAS is a non-profit entity that was first established in 1954 to promote, preserve, and protect Greek culture, heritage, and tradition through strong community relations. UHAS serves as the lead organization for coordinating the annual Epiphany Blessing of the Waters, Greek Independence Day, and OXI Day events.

The “Greek Bicentennial Celebration” can be watched safely online at https://www.pacpark.com/live

Exclusive Interview of Eileen Macam-Manalo. A Story of Dedicated Mother

Don’t give in to fearmongering and hype – this year, let’s get Child Abuse Awareness Month right