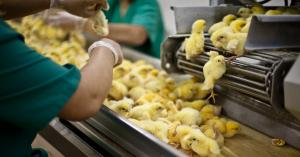 Chicks being sorted by workers moments after birth. 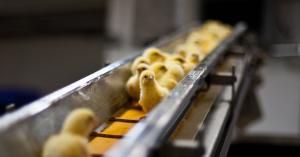 Confused and scared, baby chicks move through the processing facility. 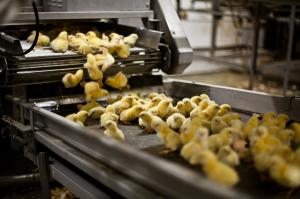 Viewed only as a commodity by the industry, newborn chicks await their fate.

30,000 Chicks are Suffocated, Electrocuted, or Ground-Up Alive Every Hour in the U.S.

No consumer would consider suffocating chicks in a trash bag or grinding them up alive humane.”
— Sharon Núñez, President of Animal Equality

LOS ANGELES, UNITED STATES, March 30, 2021 /EINPresswire.com/ — Animal Equality has launched a campaign in the United States to draw attention to the widely unknown practice of killing male chicks as soon as they are hatched, known as chick culling. Billions of birds across the globe face death on the day they are born simply because their lives are not considered profitable. In the U.S. alone, over 260 million male chicks are killed each year. This means about 30,000 freshly hatched chicks die every hour.

Because male chicks cannot lay eggs and they are not the same breed of chicken used for meat, these baby animals are deemed worthless by the egg industry and are killed by gassing, suffocation, and electrocution. One of the most common methods used is maceration, in which the animals are dumped on conveyor belts that lead to a machine called a grinder and are killed by “shredding.” The birds are alive and fully conscious as their bodies are ground up.

“This practice is unacceptable and must be legally prohibited. No consumer would consider suffocating chicks in a trash bag or grinding them up alive humane,” says Sharon Núñez, President of Animal Equality. In addition to animal cruelty, the industry’s practice of killing day-old male chicks raises an issue of consumer deception, given the common use of animal welfare claims on egg products. For instance, even eggs labeled as “American Humane Certified” are produced from supply chains that kill male chicks.

With increasing public knowledge and disapproval about chick culling, there has been a race for which company can solve the problem first. In 2019, the Foundation for Food & Agriculture Research (FFAR) and the Open Philanthropy Project, awarded over $2 million to 6 companies to develop a technology that can accurately and rapidly determine a chick’s sex as early as possible in the egg production process. Last year, Soos Technology, an animal science company in Israel, was awarded a $1 million grant by Grow-NY. Worldwide, various alternatives to chick culling are currently in development or are being tested to bring this practice to an end. This technology is usually called “in-ovo sexing,” which allows producers to determine the sex of the embryo before it develops into a chick. In fact, due to the availability of this technology and the outcry regarding chick culling itself, France has pledged to outlaw the practice of culling unwanted male chicks by the end of 2021, and Germany has announced that the culling of day-old male chicks will be outlawed in 2022.

“The practice of male chick culling by industrial egg producers is a violent, unnecessary step in an already cruel industry. It’s time for legislators to act swiftly to ban this despicable slaughter and for U.S. egg producers to immediately stop the avoidable killing of day-old chicks,” says Núñez.

AI and Its Future in Healthcare