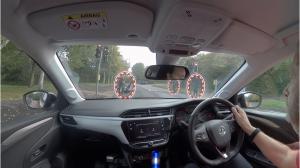 A view from one of the 360 degree videos on the Young Driver app showing how to deal with pedestrian crossings. CREDIT Young Driver 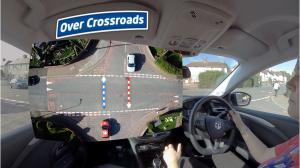 A view from one of the 360 degree videos on the Young Driver app showing how to tackle crossroads. CREDIT Young Driver

COVENTRY, WEST MIDLANDS, UK, April 21, 2021 /EINPresswire.com/ — Lockdowns have meant that 1.4 million teenagers have potentially had their driving tuition put on hold with the number of driving tests falling by 790,000 (64 per cent) in the nine months from April to December 2020 compared to the year before. No driving lessons, tests or even practicing with a family member have been allowed in lockdown and driving instructors warn of long waits for lessons.

A new Young Driver App will, for the first time, help take learners from first lesson to driving test by providing repeatable, cost-effective lesson practice via 360° videos filmed with Approved Driving Instructors (ADIs), which can be viewed remotely from home. This is alongside theory test information, practice modules and hazard perception videos – everything needed to complement in car tuition.

Viewable on phones or VR headsets, the 360° view can be rotated to see manoeuvres from every angle. Written and narrated by driver’s champion, Quentin Willson, the initial series of 12 videos take teens through learning to drive step-by-step as they would in real-life lessons. It covers everything from tackling junctions and roundabouts to perfecting manoeuvres such as parking or reversing.

Launched by Young Driver, the UK’s largest pre-17 driving school, head of marketing, Sue Waterfield, said: “There are lots of learn-to-drive apps that focus on the theory test, but the 360° in cockpit view helps animate remote learning because it’s so immersive.

“Young Driver knows from the hundreds of instructors they work with that waiting list for learners in 2021 will be considerable and the number of available instructors in Britain had already dropped 17 per cent in the last 10 years . While nothing replaces practical lessons, the app will help teens keep practicing even if they can’t physically get out in a car.”

Quentin Willson, who wrote and narrated the content for the 360° videos, added: “This is game-changing with ADIs driving cars on real-life roads so learners can practice and repeat lessons remotely at home. This will be an invaluable resource for learners to become more familiar with road situations through constant repetition at home.”

Nicola Morgan, an award-winning author and international speaker specialising in adolescent development and wellbeing, believes that learning ‘virtually’ could help teens retain information better. She said: “Many teenagers enjoy virtual reality and enjoying the learning process does help the learning. We also know that watching someone do something is often a useful way to begin to learn. There’s a theory that mirror neurons in our brain fire when we watch someone do something and that this may help us later perform that action ourselves. So, watching an instructor perform an action in a 360° video might well improve speed and efficacy of acquiring driving expertise. Every time we try or practise, we grow and strengthen neural connections. This allows us gradually to become better at the action or to retain memories better. It’s a scientific basis to the ‘practice makes perfect’ adage.”

Lance Peake, who is a driving consultant for Young Driver and an ADI, helped create the videos, as well as starring in some. He said: “It’s been a pleasure contributing to such a worthwhile project, the 360° VR films are a fantastic resource that anyone of any age or driving experience will be able to use to improve their knowledge and skill. For me as a driving instructor the app will definitely help my learners catch up on valuable time lost in what has been a difficult and frustrating period over the last year.”

The Young Driver App can be downloaded from the App Store or Google Play.

Young Driver specialises in teaching 10-17 year-olds how to drive. The scheme has delivered more than 900,000 driving lessons at 70 private venues across the UK. Lessons take place in a brand new, dual controlled Vauxhall Corsa SE Premium with a highly qualified driving instructor. The emphasis is on safety and fun, allowing youngsters more time to perfect driving skills such as gear changes, braking, parking and steering without the pressures of public roads. For more information go to www.youngdriver.com