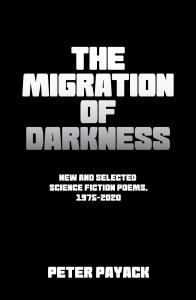 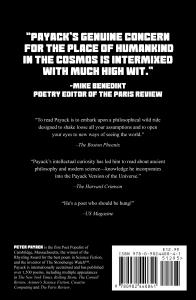 back cover of The Migration of Darkness, New & Selected Poems 1975-2020, with supporting quotes 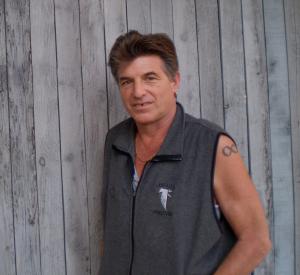 Payack’s genuine concern for the place of humankind in the cosmos is intermixed with much high wit.”
— Michael Benedikt, poetry editor of The Paris Review

Peter Payack, the first Poet Populist of Cambridge, Massachusetts, is not a science fiction writer who happens to write poetry, but rather an award-winning poet who helped move science fiction poetry into the literary mainstream. The Rhysling Award winning poet has culled scores of his most renowned works into this single volume. The poems in The Migration of Darkness, New and Selected Science Fiction Poems, 1975-2020 were first published in some of the world’s leading journals from the Paris Review to Asimov’s Science Fiction Magazine, from The New York Times to Rolling Stone and Amazing Science Fiction. The eponymous poem, The Migration of Darkness, has been spotlighted the world over dozens of times in magazines, anthologies, college and high school course curricula and websites.

In fact, this poem that won the Rhysling Award as the Science Fiction Poem of the year was recently named the best poem that unites science and art (Quirk Books.) Omni Magazine named it the #2 Science Fiction poem of all time and it is also used in the ubiquitous Masterclass “How to write Speculative Poetry: Step-by-step Guide.”

Michael Benedikt, poetry editor of The Paris Review said, “Payack’s genuine concern for the place of humankind in the cosmos is intermixed with much high wit.”

The Harvard Crimson states “Payack’s intellectual curiosity has led him to read about ancient philosophy and modern science—knowledge he incorporates into the Payack Version of the Universe.”

The Boston Phoenix states “to read Payack is to embark upon a philosophical wild ride designed to shake loose all your assumptions and to open your eyes to new ways of seeing the world.”

This collection is jointly published by Chthon Press (Austin, Texas) and Assembly Line Studios (Cambridge, Massachusetts). The Migration of Darkness contains more than 125 poems and is available in both paperback and eBook editions from Amazon Prime and as a PDF from Chthon Press.
Peter Payack has 20 books to his credit, including No Free Will in Tomatoes and Blanket Knowledge both from Zoland Books.

Payack is the inventor of The Stonehenge Watch™, a replica of the megaliths at Stonehenge inside of an old-fashioned pocket watchcase, which can be used as a shadow clock to tell time, mark the seasons and predict eclipses. The Stonehenge Watch™ has been featured at the International Sky Art Conference at M.I.T., was named the “eclipse predictor” for the Great American Eclipse by The American Journal of Physics and had been sold at the Stonehenge historical site. For more information call Peter Payack at 617.512.9196, visit www.peterpayack.com, or order on Etsy.com

As a Sky Artist Payack was commissioned to do “Star-Poems!” a night-time environmental poetry project where short celestial poems were flashed from an electronic grid on the underside an airplane’s wings for The New York Avant Garde Festival, The International Sky Art Conference (M.I.T.), The Harvard 350 Celebration and Boston’s First Night.

Payack’s Poem, “No Free Will in Tomatoes” has been sandblasted into the brick floor of the Davis Square Subway Station (Boston’s Red Line) since 1984.

Peter was an Assistant Professor at The Berklee College of Music and taught Technical & Scientific Communications at The University of Massachusetts, Lowell for over 30 years where he was awarded the 2010 Haskell Award for Distinguished Teaching. Payack has also been a visiting artist at The Center for Advanced Visual Studies at M.I.T.

Payack has coached The Cambridge Rindge & Latin School Varsity wrestling team since 1996 and has run over 100,000 miles, hundreds of road races and 24 marathons, including twelve Boston Marathons.

Peter and his wife Monica have two sons. Mike, who is a Human Services Planner and writer, and Peter Paul who is a graphic designer and editorial cartoonist.