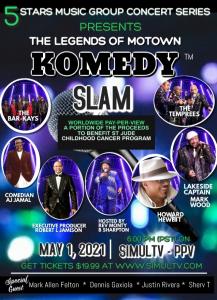 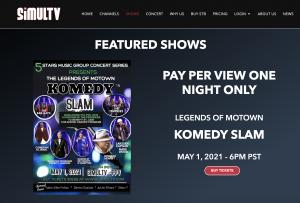 COVINGTON, VIRGINIA, UNITED STATES, April 23, 2021 /EINPresswire.com/ — 5 Stars Music Group Concert Series presents “The Legends of Motown Komedy Slam”, a pay-per-view event available exclusively on SimulTV. This once in a lifetime event is in celebration of the 50th anniversary of the R&B Soul group The Temprees with some of the proceeds going to St. Jude Childhood Cancer Research Program . The Pay-Per-View will be available for 30 days starting May 1, 2020 at 6:00 PM (PDT).

“The Legends of Motown Komedy Slam” is a concert and stand-up comedy event you don’t want to miss! Special guests, music artist, and comedians paying tribute to the legendary soul group The Temprees are:

“The Legends of Motown Komedy Slam” available on Pay-Per-View for $19.99. Gain access to the event for 30 days exclusively on SimulTV starting May 1, 2021. Tickets Available at SimulTV.com. Purchase your tickets today.

MUSIC ARTIST AND COMEDIAN LINE UP:
Howard Hewett Jr.  is a Grammy Award-winning American singer–songwriter. Hewett rose to fame as the lead vocalist of the Grammy winning R&B/soul vocal group Shalamar. Know for songs like “Make This A Night To Remember”, Dancing in the Sheets”, ‘I’m For Real” and “Say Amen”.

The Temprees are an American soul vocal trio from Memphis, Tennessee, most popular for Dedicated to The One I Love during the 1970s. The band released several albums on We Produce records, an offshoot of Stax Records. In 1972, the band performed in front of more than 100,000 fans at the famous Wattstax festival in Los Angeles.

A.J. Jamal is a product of the Cleveland, Ohio comic scene, A.J. knew he was destined for this particular aspect of show business. Growing up, he was always armed with a technique for making people laugh at the drop of a dime.

Lamont Bonman has performed as Rev Monty B. Sharpton in clubs, churches and concerts across the country. He created the wildly popular group Rev Monty B Sharpton and the Anointed Oreos known for their hilarious parodies which are featured on their CD Brand New Oldies.

Justin Rivera is a nationally recognized, professional comedian and magician, who has appeared on many, worldwide stages and national television shows.

Dennis Gaxiola is one of America’s funniest clean comedians. The preacher’s son gained notoriety from his appearances with Jamie Foxx on Comedy Central, The Latin Kings of Comedy Tour with Paul Rodriguez, BET’s Comic View, Que Locos and the 2010 season Martin Lawrence’s First Amendment Stand Up.

Sherwin Arae aka Sherv T
Originally from Tehran, Iran. Sherwin came to America at a young age raised in an Iranian household while attending American schools created Sherwin’s comedic foundation. Sherwin Arae is known for his quick with, observations, and shockingly accurate impersonations. Having toured with Lavell Crawford, featured for Russell Peters, … His comedy career began at the age of nine when he started impersonating his uncles. Word quickly spread that Sherwin had this ability and calls started coming in from relatives overseas requesting to hear these impersonations.

ABOUT 5 STARS MUSIC GROUP CONCERT SERIES:
5 Stars Music Group Concert Series Pay-Per-View (PPV) channel on SimulTV is moving beyond awareness. Dr. Robert Jamison, Executive Producer of 5 Stars Music Group Concert Series is celebrating his 9th annual cancer musical fundraiser with the 50th Anniversary tribute for the Temprees. We are determined to lead the charge to diversify childhood cancer research – the inclusion of diverse participants is necessary to ensure reliable, widely applicable results. In 2012 Jamison created the Together Forever Musical Concert Series a movement to show his support for children around the world who are affected by brain cancer. He continues to support St Jude in honor of his little nephew Dereck Dawson-a childhood cancer Survivor whom at the age of five was diagnosed with a Brain Tumor and in memory of others that lost their battle to this horrible disease.

SimulTV also offers a Set-Top Box (not required for subscription) which is small enough to fit in a back pocket, enabling viewers to take it with them on the road anywhere in the world. A subscription also provides the ability to connect two additional devices – a mobile phone, tablet, computer, or television. SimulTV apps are free in the Google Play and Apple App Store.