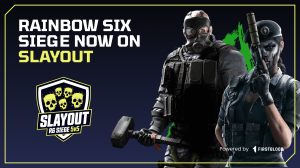 We couldn’t be more excited to bring something new and exciting to the Rainbow Six Siege Community.”
— Emily Peel

Slayout understands the growth opportunities and demand for more grassroots tournaments within the Rainbow Six scene, in addition to larger events that will support the professional competitive circuit. The collaboration with FoxA and Braction is sure to drive Slayout’s passion and vision home to the Rainbow Six community.

For those who aren’t already familiar with Slayout, they exploded onto the scene late last year with massive Warzone tournaments and have been steadily ramping up ever since. Earlier this year, Apex Legends and Cold War tournaments were added to Slayout’s calendar and according to CEO Joe Zhou, “this is just the beginning.”

According to Emily, Slayout’s 2021 Roadmap includes big plans for Rainbow Six including a showcase series that’s in the works, which she hopes to unveil soon. Until then, Siege fans will just have to wait on baited breath for what’s to come.