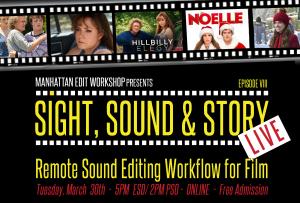 Sight, Sound & Story: Live event series continues in March with a behind the scenes look at Editorial Sound

NEW YORK, NY, UNITED STATES, March 25, 2021 /EINPresswire.com/ — As part of Manhattan Edit Workshop’s series, “Sight, Sound and Story”, Janet Dalton and Jason Banke have gathered artists and collaborators in the world of sound to explore their creative and technical collaboration from the edit to the mix. postPerspective’s Randi Altman will moderate the session on March 30th, 2021, at 5pm EDT.

Robert Hein, Josh Berger, Grant Elder, and Ian Cymore, have worked as a team for many years, collaborating on a host of projects. On this panel, the team will discuss their creative and technical process through sound editorial on Ron Howard’s “Hillbilly Elegy” and Disney’s “Noelle.”

In sharing their editorial workflow, they hope to inspire sound editorial teams with different approaches to creatively collaborating for both sound design and dialogue editorial in preparation for any mix.

This event wouldn’t be possible without our Master Storyteller Sponsors: OWC, American Cinema Editors, & EditFest Global; as well as our Technology Sponsor: AJA. We are also grateful for the continued support of our invaluable partners ProductionHUB, Digital Cinema Society, LAPPG, NYWIFT, Film Fatales, and The D-Word.

Panelists:
Robert Hein started his career as an assistant sound editor on “Sophie’s Choice,” for which he created the scream as the daughter is being taken away from her mother. It was on this job that Robert realized how sound has the capability for gut-wrenching power in filmmaking. Since then, he has been nominated for BAFTA, Emmy, and MPSE awards, and has collaborated with such inspiring directors as James Ivory, Lee Daniels, Marc Lawrence, Ron Howard, Jim Jarmusch, Alan Yang, and James Gray.

Robert’s approach to his work is very personal. He says, “Each new project represents a part of me. I know it is a temporary endeavor, but we put our heart and soul into these films. So, when I start, I take it as very personal experience.” It’s his subtle art of pushing the soundtrack of a film to new levels, while exceeding the filmmaker’s creative intent, that has earned him a reputation of trusted collaborator.

Josh Berger is an Emmy-nominated re-recording mixer who has worked alongside such revered directing talents as Ron Howard, Reinaldo Marcus Green, Steven Soderbergh, James Gray, Alan Yang, and Ken Burns. His work has been seen at festivals around the world such as Cannes, Toronto, Berlin, NYFF, Tribeca and Sundance. Prior to joining HARBOR in 2013, he worked with Technicolor-Postworks in NYC, honing his craft on a variety of commercials, promos and TV shows for Discovery, NBC, Food Network and The History Channel.

Josh is “dedicated to collaborating with clients to create an exceptional soundtrack.” He approaches every project differently, allowing the story and director’s vision to lead the creative process.

Grant Elder is a sound designer, re-recording mixer and supervising sound editor who has collaborated with such acclaimed filmmakers as Ron Howard, Steven Soderbergh, Maggie Gyllenhaal, Nia DaCosta, and Michael Tyburski. Grant’s work on Fisher Steven’s documentary ”Before the Flood,” starring Leonardo DiCaprio, earned him a nomination for a MPSE Golden Reel for Best Sound Editing.

Grant works to craft unique sonic landscapes for every project. He says, “Whether that’s by wielding original sound design, authentic field recordings, or dynamic mixing, the goal is always to help create a visceral experience for the audience while serving the story and the filmmaker’s vision.” Grant’s technical expertise blended with his artistic sensibilities and his ability to make filmmakers comfortable on the stage has allowed him to build meaningful relationships with creatives.

Ian Cymore started his sound career as a live engineer for concerts and theatrical productions. Eager to transition into the post-production arena, he subsequently secured a role with HARBOR. He is now an accomplished supervising sound editor and re-recording mixer for both film and television. He has collaborated with directors such as Michael Tyburski, Edward Burns, Joel Edgerton, Chris Smith, Steven Soderbergh, and Alan Yang. His work on “Tiger King” earned him Emmy nominations in both Best Sound Editing and Sound Mixing.

“A film with sparse and subtle sounds can be as impactful as a film with many layers of complex sound elements,” Ian explains, “It’s within those details that I can execute the director’s vision.” Ian’s keen ear for crisp dialogue is highlighted in every film he supports.

Randi Altman has been working in and reporting on the post industry for more than two decades, and she’s a respected authority on technology and how it’s used. As editor-in-chief of postPerspective, she works as a crucial bridge between the post and production communities and the technology companies that serve them.

*All speakers are subject to availability

Cher Grant of Wazzio to be Featured on Close Up Radio

Kelsie Kimberlin Releases ‘Hazy Day,’ The Most Beautiful Song And Video Of 2021