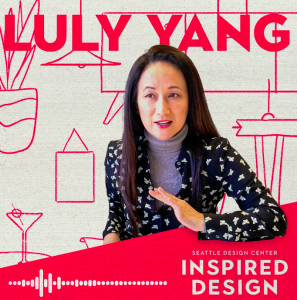 SEATTLE, WA, UNITED STATES, April 26, 2021 /EINPresswire.com/ — The Seattle Design Center (SDC), the Pacific Northwest’s only designer showroom, announces today the launch of their first podcast series, “Inspired Design: Iconic People and Iconic Places” available May 5, 2021 through Apple Podcasts, Spotify, Google Play, Stitcher, and Outcast. This seven-episode podcast, hosted by Gina Colucci, the nucleus of the SDC, features an impressive and diverse line-up of Pacific Northwest iconic creators, from designers, musicians, chefs and business leaders, who tell intimate stories about their favorite spaces either personal or that live within the community.

Inspired Design piques curiosity, heightens senses and transports each listener into the depths of their favorite iconic spaces. The conversation between Gina and the guests explore familiar and unfamiliar places as well as dive into never-before-shared personal, intimate sanctuaries. Inspired Design brings authentic and inspiring conversations to listeners who have a genuine appreciation for the intricacies of design, and who crave newfound knowledge about the brilliant minds that amaze us, and the distinctive spaces that evoke emotion. Colucci says, “SDC created this podcast to dive deep into some of the most brilliant minds from the PNW – to learn and discover what brings them inspiration through space, design or texture. As I connected with each guest, my love for Seattle exploded with deep admiration and sparked a sense of childlike excitement that I believe will translate to each listener from industry insiders to the designer curious.”

As a taste of what one can expect, Luly Yang takes listeners on a journey through her world-renowned bridal, evening and uniform collections, her signature process and reveals for the first time, her next collection that will launch this spring. LaNesha DeBardelaben delights listeners with her deep knowledge of African American history and the personal connection back to Seattle and a deep dive into some famous Seattle families with a soulful and beautiful energy that is uniquely her style.

The complete lineup of guests for the first series include:
● Luly Yang – Multi-award-winning artist and internationally known fashion designer based in Seattle. Her most recent project: the exciting and highly visible new uniform design for Alaska Airlines’ 19,000+ employees. Luly has been named a “Women of Influence” by the Puget Sound Business Journal, “Best Custom Dress Designer” by Seattle Bride Magazine for 13 consecutive years, and has received the Nellie Cashman Woman Business Owner of the Year Award.
● Alan Maskin – Principal/Owner of award-winning architectural firm, Olson-Kundig. Alan has been awarded first place in multiple international design competitions, including The Bob Dylan Center, The Jewish Museum Berlin Kindermuseum, and Fairy Tales 2016, the world’s largest architectural ideas competition. Alan led the recent renovation of Seattle’s iconic Space Needle.
● Tom Douglas – Nationally-recognized and award-winning Seattle-based chef, has been cooking up Pacific Northwest cuisine since 1984. In addition to being an American executive chef, he is also recognized as a restaurateur, author, and radio talk show host. Awards include 1994 James Beard Award for Best Northwest Chef; 2012 and James Beard Award, Best Restaurateur.
● LaNesha DeBardelaben – President & CEO of the Northwest African American Museum. She is a public historian, museum administrator, and writer. She studies the intellectual lives of Black women who attended predominantly white colleges in the early 20th century and their later civil rights activism. At the University of Washington, she is a doctoral candidate in the College of Education and writes about African American educational history.
● Tomio Moriguchi & Denise Moriguchi – Tomio is an American businessman and civil rights activist who served as CEO of the Uwajimaya supermarket chain in Seattle from 1965 to 2007. His daughter, Denise, is the current president and CEO of Uwajimaya. In addition to her role as CEO, she was appointed to the Washington State Convention Center’s board of directors and was one of the members of the 2018 Japanese American Leadership Delegation.
● Linda Derschang – Founder and CEO of The Derschang Group; a mix of restaurants, cafes and bars in Seattle, Washington. Her first was Linda’s Tavern, established in 1994, a neighborhood bar that has become a Capitol Hill institution. Twenty-five years later, she’s launched eleven successful bars and restaurants, while staying committed to community involvement and causes.
● Nathan Merhvold – Formerly Chief Technology Officer at Microsoft, is co-founder of Intellectual Ventures and the principal author of Modernist Cuisine and its successor books. Mehrvold was listed as co-inventor on 17 U.S. patents at Microsoft and is co-inventor on over 900 other U.S. patents issued to his corporation and its affiliates.

The People’s Party Registers in Oregon

Live Taping of Comedians from the Carolinas

Harmonize, Non-Profit in Support of Performing Artists and the Community, has Opened Doors for Various Shows