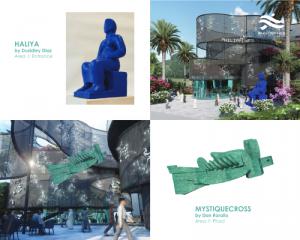 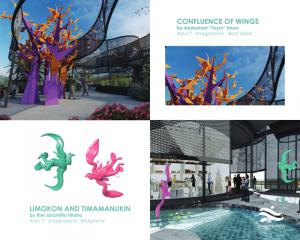 Sculptors Duddley Diaz and Dan Raralio, and multi-media artists Toym Imao and Riel Jaramillo Hilario are four of the dozen Filipino artists who were commissioned by the Philippines Department of Trade and Industry (DTI) for tthe Expo 2020 Dubai. These artists will collectively present a cosmopolitan profile of the Philippines at the country’s pavilion at the Expo.

Employing their individual artistic languages, these artists will provide the Philippines’ Pavilion with a sequence of visual and physical experiences that draw on both updated scientific data and the mythological imagination of the Filipino.

Instead of reusing folk art concepts, they confidently wield their fluency in Modern and Contemporary Art idioms to inspire fresh insight into the Philippine experience. Their collective vigor is expected to drive the pavilion’s intent of showing to the world a Philippines where art, science, and powerful imaginativeness prevail despite the odds.

Considerable interest pulls them in the direction of mythology for the future.

Duddley Diaz’ immense, blue, and confrontingly pregnant figure of the mythic Haliya — positioned to hugely mark the pavilion entrance plaza — sets the tone for experiencing myth as simultaneously ancient and a projection to the deep future. Diaz’ well-known virtuosity with expressive massing is used in the pavilion to communicate a major message: confidence in Philippine culture, in the context of the Expo District on Sustainability.

Suspended nearby in the same entrance plaza, Dan Raralio’s “Mystiquecross” is an ambiguous fish-like figure taking form as an amalgam of old-tech shapes, made oddly older by the verdigris finish. The Raralio machinic fish carries aloft the theme Diaz begins for the pavilion — the activations of the mythic imagination to speak to the future —confidently bringing together the ideas of metallic weight and animal buoyancy.

The themes of mythic flight and creatures of the mind also end the pavilion experience. Toym Imao’s sculpture of an explosion of bird forms is located at the topmost level of an extended outdoor ramp wrapped around the pavilion core. Visitors will enter a space marked by columns; its “roof” are birds in flight. “Confluence of Wings” resurrects birds in Philippine mythology as symbol of elevated states of being.

The same bird symbology is reiterated in Riel Hilario Jaramillo’s “Limokon and Timamanukin”: half-human-half-avian, suspended creatures. The creatures appear to accompany visitors in one midway passage, poised above ground as though waiting for take-off. Birds —alternatively omen animals, or materializations of spirits in flight, in oral traditions from all over the Philippine archipelago — are in Jaramillo’s sculptures, the Filipino male and female avatars.

Duddley Diaz trained at the University of the Philippines College of Fine Arts and the School of Painting, Academia di Belle Arti, Florence, Italy. It is in particular his Italian academic background that sustains his explorations of sculptural forms for Philippine themes, especially in the ways he achieves a sense of monumentality that is unusual in the country’s Traditional, Modern, and Contemporary Art fields.

The other three sculptors (who also paint) are also graduates of the University of the Philippines College of Fine Arts. Each took widely divergent paths in their decades-long explorations of form and technique, even as they remained in the thrall of aesthetic ideas from the Philippine’s artistic traditions.

Hence, while Dan Raralio’s métier is the industrial, machinic form that seem as though fossils from an archaeology of earlier technological eras, his references and motifs tend to refer to local symbolic worlds. His contribution to driving the Philippine pavilion messages of confidence is his bold approach to metals, with a sure sense of uncanny assemblage.

And while Riel Jaramillo Hilario’s explorations are strongest in the medium of wood, his continuing passions are also the symbolic universes of the Philippines. His close study of Ifugao and other woodworking traditions from different parts of the country informs a sculptural body of work that is redolent of the past but is securely in the future of sculpture in the Philippines.

Even as Toym Imao’s robust approaches to large-scale assemblages with overtly political content is immediately recognizable in the Philippines for their bravura, his frequently referenced sub-texts move around traditional worlds of imagery. Imao is particularly drawn to Muslim Philippine iconographic systems; to which he often returns.

The DTI, which leads the country’s participation at the Expo 2020 Dubai, looks at the Expo as an opportunity for the Philippines to present, on the world stage, a surprising, complex, and stirring self-portrait of a national community.

Peter Goldstein: Advising Businesses On How To Reach The Next Level