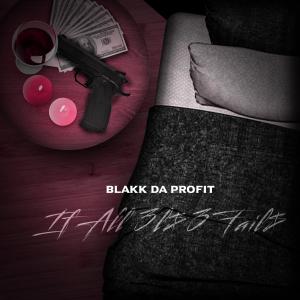 With his captivating music that melds and mixes stunning R&B beats with soulful and immersive lyricism, budding artist Blakk-Da-Profit is all set to break

CEDAR HILL, TEXAS, UNITED STATES, April 16, 2021 /EINPresswire.com/ — An up-and-coming singer and songwriter Blakk-Da-Profit is sending waves across the Rap and R&B scene with unique musical compositions that inspire and enthrall. Hopeful that he will be able to reinvent and rejuvenate R&B and Rap music with a much-needed sense of soul, the rising new artist is all set to soar.

With the release of his fresh new single aptly titled “If all else fails”, the budding singer delivers a complete package perfectly condensing the spirt of contemporary R&B music: addictive and memorable instrumentalism blended seamlessly with expressive songwriting.

Having released on 9th April 2021, “If all else fails” is the first of a planned collection of singles and tracks that Blakk-Da-Profit wishes will culminate into a refreshing and persuasive album. The new single is accentuated by Blakk-Da-Profit’s strong vocals set against powerful and engaging songwriting that is bound to inspire and captivate R&B fans.

Available on the artist’s official streaming platforms, “If all else fails” was produced by platinum-certified producer TNxtd and has been a work that has been released independently.

An exciting and an enriching experience, “If all else fails” is the first of several singles that Blakk-Da-Profit intends to release as part of his upcoming new album titled ‘360°’ which will be released in Mid-2021. The single highlighting life struggles also forms a precursor to Blakk-Da-Profit’s second track “FR33” which is also available on his channels.

“Maintaining authenticity while [highlighting] struggle via music that anyone can relate to”, says Blakk-Da-Profit regarding his new music.

Check out his new single and discover more about Blakk-Da-Profit on the links below and/or reach out via the contact information for interviews, collaborations, and promotional access.
####

Blakk-Da-Profit is an up-and-coming singer, songwriter and producer who hails from Cedar Hill, Texas. Driven to revolutionize the genres of Hip Hop and R&B, the budding artist wishes to use his talents to establish himself as a talented powerhouse in the music industry.

Having recently released his new single titled “If all else fails”, Blakk-Da-Profit is now planning to showcase his brilliance on a solo upcoming album, which continues the story he began through his single. Apart from offering his moving vocals and songwriting to the new single and planned album, Blakk-Da-Profit also heads Blakk Sheep Entertainment LLC, through which he has released the new single.

Growing up, the rising artist continued to evolve and grow his musical talents and abilities, internalizing lessons from life and from his inspirations, which he now imbues into his music with ease. Blakk-Da-Profit hopes to connect with fans of his music and expand his footprint in the musical scene as a growing sensation.

Cashier Myricks, a leading lifestyle coach, featured in an article highlighting the necessary tools for life