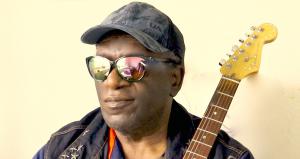 Welborn is one of the most exciting new musicians to hit America, blending trance elements of traditional African rhythm, English rock, and American funk and blues. His sound is out of this world.”
— The Hollywood Sentinel

MALIBU, CA, UNITED STATES, April 14, 2021 /EINPresswire.com/ — Welborn, formerly known as Well Born and Ayawo Attivor, is a Togolese singer, multi-instrumentalist, and producer from Togo, West Africa; now living in America. His sounds are transcendent; blending the heart and soul of West African percussion and maraca with English rock and American funk and blues, lending itself to a sound like little else of its kind. From the motherland of Africa’s soulful vibrations, to the smooth riffs of Hendrix’s style, Welborn brings to Las Vegas, and now America–a new vibe and a new soul that is at once hypnotic, otherworldly, and indeed–great. The Hollywood Sentinel spoke with the rising new star from Las Vegas this week, as follows.

Hollywood Sentinel: Where are you based now?

Welborn: I am living in Las Vegas.

Hollywood Sentinel: How is the city now, is it open much?

Welborn: The city is opening slowly and so we all musicians we are just praying and hoping.

Hollywood Sentinel: We are seeing things are getting better and concerts will be happening again soon. For those that don’t know of you, fill us in on who you are, what you do and where you are from.

Welborn: I am from Togo, West Africa, So my dad was a general at the embassy of America in Benin. So, he loved to play all those songs like Duke Ellington and all those people, and I was really interested since I was baby, listening to all those musicians, plus our own countries’ music. So, since I was a baby I fell in love with music, and I love to play the guitar. And I love my guitar to sound like a piano at the keyboard. It was in 1960-something when my dad was playing Duke Ellington on piano, and I said I wanted to sound like this on my guitar. So, then I discovered Jimi Hendrix, and I said “Wow!” So, I learned all the Jimi Hendrix songs! Before that I loved the Beatles, and after that I discovered The Rolling Stones, and those were my influences.

Hollywood Sentinel: Nice. So, you were playing bass or guitar or what?

Welborn: I started with a guitar with 3 strings.

Hollywood Sentinel: Were you doing vocals then too and do you sing now?

Hollywood Sentinel: I heard your track, “We Gonna Do it: We are Going to Break the Darkness,” among others. Are you doing vocals on those?

Welborn: Yes, I do vocals on that.

Hollywood Sentinel: That’s great. I can tell you are great just from the first few second of those tracks. We’ll put a link up for those for people to hear. Are you writing your own songs now?

Welborn: Thank you. Yes, I write myself.

Hollywood Sentinel: Who trained you?

Welborn: I was just listening, and I tried to play what I was listening to.

Hollywood Sentinel: Well, you taught yourself well! You have a unique style; I have not heard anyone play guitar quite like you!

Welborn: In 1974 I played for the Cannes Film Festival; it was among 80 countries. At this same festival, they had a music festival. I shared the stage with Stevie wonder, The Pointer Sisters, and many others.

Hollywood Sentinel: Wow, well, they were in good company with you! And I know you now have more than three strings!

Welborn: Yes (laughs). So, when I started performing I began mixing this African native beat with a kind of distortion guitar. When I was five years old, my dad and I left (to Paris) and I came back when I was about ten years old, and then I started doing the music, music music! And after that I was performing for the head of states in our country. And finally, I performed for about forty heads of states. So, when the president was traveling, I was an entertainer, so I performed for the president of West Africa. Then I went back to France again and I became the artistic director of a music production company there.

Hollywood Sentinel: Wow, so do you speak French?

Hollywood Sentinel: (Laughs) Nice! I love the French cinema and a lot of their culture, and language. Did the traditional religion of Africa influence your drumming at all?

Welborn: I’m not involved in that but I am involved in the cultural native traditional music of African music and drums and all that.

Hollywood Sentinel: Nice. Is there anything else you want to share with our readers before we wrap up?

Welborn: I know that very soon we will be releasing some new sounds of new music and I hope that many people will enjoy it and love it.

Hollywood Sentinel: I’m sure they will. Thank you and talk with us here again soon.

Music and image provided with kind courtesy of Welborn.

From the Doghouse to the Penthouse: Shelter Dogs Spend the Night at Maui’s Luxury Resorts

One in four Gen Y, Z auto intenders says electric vehicle tech will be a “must have” in next car