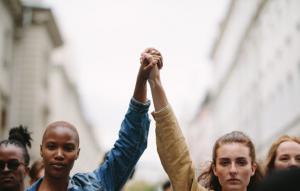 USA, April 6, 2021 /EINPresswire.com/ — The march is one of the most important dates in the American calendar for 2021. It is aimed to give people a voice and to fight for justice and freedom. The march is over two days and will start at New York City Hall to Union Square to United Nations/Times Square.

An important march is set to take place on April 9th and 10th that will fight for freedom and justice for those living in the USA and around the globe. Fernando Lorenzo who is the organizer of the march has joined forces with Coalition Z to help spread awareness of this important campaign.

The march is to fight for an equal America, and an equal world where everyone is treated the same and everyone has the same opportunities. Fernando Lorenzo who has 10 Demands For Public and Private Organizations will start the March For Freedom and Justice will start at New York City Hall and continue to Union Square and United Nations/Times Square.

The world changed when George Floyd’s life was taken, and now people are standing up for what they believe is their right.

Fernando Lorenzo wants the march to send a clear message to President Biden and world leaders that whites, and non-whites, Asian Americans and people of color (e.g., Black Americans, Latinx, LGBTQ, etc.) are treated the same. He wants the world to sit up and take notice that the injustice and bias has to stop.

“We are demanding change. There should be equal opportunities for everyone, and everyone should be treated the same,” explained Fernando Lorenzo

Fernando Lorenzo said the world needs to change for the better. “We are demanding reforms against this systemic racism, bias, and inequality. We are hoping to reach out to those in power (e.g., world leaders, representatives, etc.) that we have #10demands for them to solve this global systemic issue.

Martin Luther King Jr. famously said in 1963 “I Have A Dream”, sadly the dream of an equal America and equal world never materialized. However, Fernando Lorenzo and his supporters want to send a message that the change needs to start now.

The world media are set to cover the event, giving Fernando Lorenzo and his supporters a global platform to get their message across to world leaders and business leaders to do what is right. Fernando wants all those people who care about justice and freedom to march with him.
Fernando Lorenzo is looking for volunteers for this upcoming event as well as for the future events which includes organizers, speakers, artists, musicians, security, etc. Those who want to support the event and future events are asked to email message@zamericanleader.com or via Facebook.com/AmericanLeaderZ for more info!

Notes to the editors

10 Demands For Public and Private Organizations

2. End the war on drugs and decriminalize possession of all drugs. Treat drug abuse as a mental health issue, NOT as a criminal issue.

4. Reform the education system. Add more Asian American history to all educational books and curriculums, reduce school hours and focus more on teaching students the history of their local communities and critical skills necessary to survive in the 21st century, NOT on more standardized testing, memorization, and returning to the status quo.

5. More permanent work from home options for parents, teachers, and students alike. Many people want to save the environment, spend more time with family, have medical conditions, or just don’t want the hassle of having to deal with more discrimination and violence in person.

6. Invest more in Asian Americans and minority communities, supporting local businesses, include them as part of your everyday social and personal group, standing up for what’s right, etc.

DesignerBoard3D Announces 500 Designers Have Signed Up Since Platform Launch