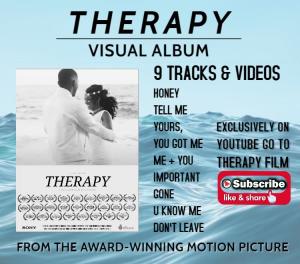 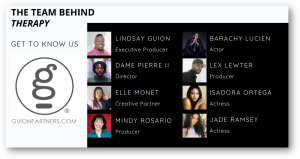 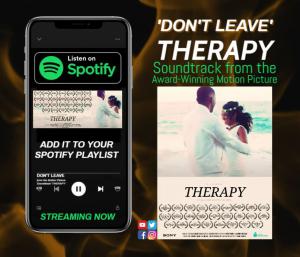 ‘Music Inspired by Therapy’ is available on Spotify and all streaming platforms.

In addition to being the E.P., of Therapy, Guion also represents Barachi, who is the lead actor in the film and performs on the music score.

NEW YORK, NY, UNITED STATES, April 23, 2021 /EINPresswire.com/ — Lindsay Guion is the Founder and CEO of a talent representation firm, Guion Partners, who has recently won the “Best Producer” Award for his role as executive producer, of ‘Therapy’ the motion picture. Since its release, ‘Therapy’ has received numerous accolades for its outstanding cinematography and emotionally stirring soundtrack. ‘Therapy’ is the third film Guion has worked on, including the development of the film classic ‘Posse’ (Mario Van Peebles and Stephen Baldwin) in 1993 and the HBO Movie ‘Bessie’ (Queen Latifah) in 2015. Cast as the film’s lead, Actor, Barachi, plays the captivating role of ‘Jonathan’ across from actress Isadora Ortega, who plays ‘Jayda’. The movie follows two lovers as their innocent romance turns into an obsession fuelled by passion and conflict. Based on a true story, the film takes us on an emotional journey with several unexpected turns.

“The soundtrack elevates the story by conveying raw emotion and desperation, allowing for a realistic portrayal of infatuation,” says Lindsay Guion. One of the film’s songs features Grammy award-winning guitarist Isaiah Sharkey, who has worked with several notable artists, including D’Angelo and John Mayer. The song is called “Important” which encourages listeners to live each day to the fullest as if it were your last. The track is a fan favorite as it captures Barachi’s smooth vocals and Sharkey’s mastery of the guitar. Meanwhile, the lyrics to the song “Yours,” is a touching love song that captures what it means to be in an adoring relationship. “It’s been a pleasure working with Barachi. Not only does he depict an outstanding performance in the film, but the soundtrack is both heartfelt and powerful,” Guion adds. In the future, he looks forward to working alongside Barachi on other projects, both musical and film-related.

‘Music Inspired by Therapy’ is available on SPOTIFY and all streaming platforms.

About Lindsay Guion
Lindsay Guion has been at the forefront of the music industry for more than twenty years. Having studied at two of the most reputable universities, Georgetown and Harvard, Guion was well-prepared for a career in entrepreneurship. Having identified numerous problems with existing talent representation, Guion decided to launch a consultancy firm to help artists in the sports and music industries develop their careers. In 2005, he launched Guion Partners, which has grown to become a leading multi-tiered media consultancy company. Through his firm, he has worked with several admired artists and producers, including Rich Harrison, the producer for Beyoncé and Destiny’s Child, and artists like D’Angelo, Ginuwine, and Mya. He has also helped create several notable movies and soundtracks, including ‘Posse,’ the HBO movie Bessie featuring Queen Latifah, and ‘Therapy’ starring Barachi.