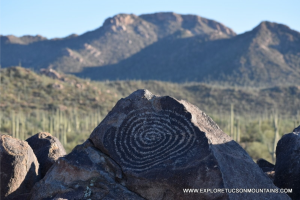 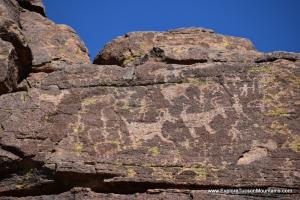 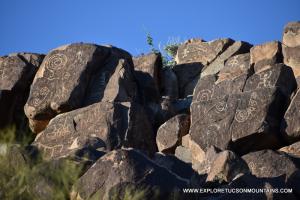 The ancient Hohokams created petroglyphs that connect you to Southern Arizona’s past.

TUCSON, AZ, UNITED STATES, April 21, 2021 /EINPresswire.com/ — Long before Facebook, TikTok, and the Internet, the first settlers in the Tucson Mountains had their own methods of social networking. Native Americans, called the Hohokams, created Petroglyphs. Petroglyphs are rock carvings made by pecking directly on the rock surface using a stone chisel and stone hammer. When the desert varnish (or patina) on the surface was chipped off, the lighter rock underneath was exposed, creating the petroglyph.

The petroglyphs in the Tucson Mountains were left by the ancient Hohokams as early as AD 850. They used rock art to tell stories or record important events. Other purposes could have been boundary markers for hunting or landmarks and clan symbols. They also included fertility and spiritual symbols along with solstice and calendar markers. Images and icons are often animals, humans, plants, astrological objects, and abstract designs, including spirals and squiggly lines. Historians and archaeologists can speculate what they mean, but the actual stores are lost with the people that drew them. The name Hohokam is interpreted
as mean “those who have vanished.” And unfortunately, the true interpretation of their petroglyphs vanished with them.

There are 21 known petroglyph sites in the Tucson Mountains. Three of the most popular and accessible sites are detailed below.

The Signal Hill Petroglyphs site is located in the Saguaro National Park – West. There are dozens of images viewable from a short trail and viewing area. Look at the images up to the left as you start to climb the trail; they are commonly missed. A large spiral image, a favorite among photographers, is at the top of the hill’s viewing area. The panoramic view of Wasson and Sanford Peak over the dense Saguaro forest is incredible.

The Redemptorist Renewal Center site is located on private property and is a unique location for solitude, reflection, and prayer. It is estimated there are between 800 and 1,000 individual petroglyphs on the hill. A large spiral petroglyph is a calendar marker that displays sunlight interactions on the summer solstice and the spring and autumn equinox days. Please check-in at the Center office or call 520-744-3400 before visiting.

The Kings Canyon Trail site is located within the Saguaro National Park – West. The trailhead is located across the street near the entrance to the Arizona Sonora Desert Museum. The trail is an old mining road, and the petroglyphs are about a mile up the trail before the Mam-AGah Picnic Area. The picnic area has a stone building built by the Civilian Conservation Corps in the early 1030s. There are dozens of images, but the site is not marked and can be easily missed.

PROTECT AND RESPECT THE PETROGLYPHS. Please do not touch the petroglyphs. The oil from your hand can harm the image. Please stay on the trail and do not climb on the rocks.

How To Choose A Dependable Essay Service For Students

Truth & Liberty Coalition Opposes the “For the People Act of 2021”