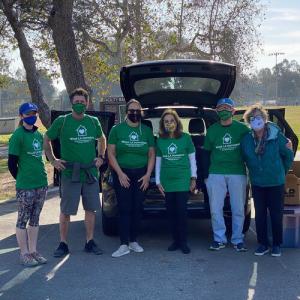 West LA Homeless (WLAH), announces its GoFundMe campaign to allow West Angelinos to help address the most serious humanitarian crisis the city has ever faced.

For a country with this much wealth, there is no reason to have anyone living on the street.”
— Michael Stevenson

WEST LOS ANGELES, CA, USA, April 22, 2021 /EINPresswire.com/ — West LA Homeless, a grassroots organization made up of West LA and Westwood resident volunteers, announces its GoFundMe campaign to help address the most serious humanitarian crisis our city has ever encountered. This homeless problem is so pervasive that our city, country, state, and the federal government have not been able to solve the challenge, in spite of numerous initiatives and millions? Billions? Of dollars of taxpayer money.

The crisis is only worsening. The LAHSA (Los Angeles Homeless Services Authority) estimates that there are 220 people per day entering homelessness. With 207 people per day becoming housed that’s nearly 5000 more people in LA County becoming unhoused every year.

West LA Homeless, formed by a group of West LA and Westwood citizens is a complete volunteer organization that realizes that every person has dignity and deserves to be treated with brotherhood and compassion. We have successfully reached out to our HOA’s, Westside Neighborhood Council, Councilman Koretz, businesses, developers, and local businesses to raise enough money to launch our program, however now WE NEED you to help sustain it throughout 2021-22. Whether it is $10, $100, or $1000 it all counts to help solve this homeless problem.

WLAH will place two caseworkers, specially trained, in the West LA area to address the needs of our unhoused population. They will determine the cause of their homelessness and match their needs with the resources available in LA and LA County where there are hundreds of services providers available. Also if they qualify they will be assigned temporary or permanent housing.

But there is a good reason for hope. In 2017 Pacific Palisades formed PPTFH (Pacific Palisades Task Force for Homeless). Their concept was to engage Case Workers specific to the Pacific Palisades area on an OUTREACH basis to gain a personal relationship with as many of the unhoused as possible, gain their confidence, and find a solution to their individual challenge. Those individual challenges range from physical and mental disabilities, spousal abuse, child abuse, addictions, or simply being forced out of a home for economic reasons.

Michael Stevenson, WLAH President stated to this release that there are several hundred agencies in LA County to serve these constituencies however it is a challenge to connect the dots in all its complexities. The Case Workers are specifically educated on all the options available to find placement in as many cases as possible. The result is that PPTFH has reduced homelessness in Pacific Palisades from 200 to 74 with additional hundreds placed in a proper solution for their challenge.

West LA Homeless will try to succeed where government solutions have not.

Make your contribution today and remember, “there but for the Grace of God go I”.

West LA Homeless cannot succeed without support from the communities in which we operate. Our GoFundMe page can be found at

Michael Stevenson is a West LA resident of nearly 20 years. He is President/COO of Critical Period Insurance Agency, Inc. which provides Cyber Security for PC’s/Servers, develops insurance products to ensure and enhance OEM warranties in addition to creating new insurance products. He is the father of 5 children, a member of St Paul the Apostle Catholic Church, and co-founder of West LA Homeless. As an athlete, he has completed 16 Ironman Triathlons in 12 countries on 6 continents. His passion is to help end the homeless crisis.