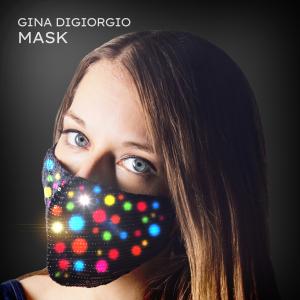 “Mask” is about concealing yourself and hiding who you really are. During the recent pandemic Gina thought about the effects of being distant from others for so long. “Mask” was created to help people feel good and have fun even in our current situation.

“Mask” has a disco influence under its pop melodies sure to make any listener get up and dance.

Last year Gina DiGiorgio made a big splash with “This Isn’t That” and “Pay Me No Mind” feat. Clyde Kelly. Her song “Figure Out”, is her most streamed song on Spotify with over 100,000 streams establishing Gina as a one to watch in 2020. Now “Mask” sets the stage in 2021 for Gina’s music as she has several upcoming projects set to be released.

Gina is currently filming the music video for the single “Mask” which will be available soon on YouTube.

Gina DiGiorgio is an LA-based pop artist and actress. She launched her music career at an early age, starring on-screen and in musical theatre productions before turning her talent to pop music. Now, with the help of multi-platinum producer Andrew Lane (Hannah Montana, High School Musical, Backstreet Boys) Gina has combined her love of theatrics and hook-heavy music to produce a contemporary pop sound. In 2019, she toured the US and Europe. She is currently live streaming on Instagram, and also on the live concert streaming platform Sessions Live. Recently Gina has been seen acting in both short and feature films by independent director Henning Morales and has music featured in some of the film’s soundtracks.