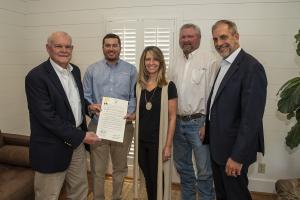 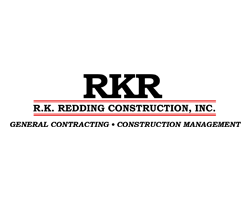 Redding was an active member of the community, construction industry and music industry

Randall was an unelected public servant because he served the public in everything he did.”
— Senator Tippins

BREMEN, GEORGIA, UNITED STATES, April 20, 2021 /EINPresswire.com/ — The life of Randall Redding was honored with a resolution sponsored by State Senators Lindsey Tippins, Mike Dugan, and Jason Anavitarte. The resolution was passed by the Georgia legislature and presented to Redding’s family, including his widow Tena Redding, during a private ceremony held at R.K. Redding Construction on Monday, April 19. Redding founded both R.K. Redding Construction and Mill Town Music Hall.

The resolution recognizes Redding as an outstanding ‘Christian businessman, family man, leader for construction and education, and a great example for all Georgia business’. It was adopted unanimously by the Senate on March 29th, shortly after his passing.

“Randall was an unelected public servant because he served the public in everything he did,” said Senator Tippins. “He was a very giving person. He was forward thinking for the future of the nation by encouraging kids to tap into their natural abilities with aptitude testing (YouScience) and other educational endeavours. Plus he was a mighty good builder.”

A man of deep faith who made a difference with everyone he met, Redding sought to love others as Christ had loved him and he exuded that love in every action. He was a man of vision and commitment that lived out the philosophy that life is about relationships. The impact he has had on the lives of all who have come in contact with him is immeasurable, as is his loss.

Professionally, Redding founded R.K. Redding Construction (RKR) in 1991 to make a difference in his hometown of Bremen, GA. Through the years, the business prospered under Redding’s guiding philosophy of putting customer service above all else. Today, RKR has grown to more than 50 full time employees who work throughout Georgia and the southeast. Under Randall’s leadership, the company philosophy was built on honesty, quality and integrity with the ultimate goal of gaining customer trust and satisfaction. This goal is evidenced by Inc. Magazine, Atlanta Business Chronicle and Georgia Trend naming the firm as one of the fastest growing companies, as well as the company being recognized as one of the best places to work in Atlanta by the AJC and Georgia Trend.

In 2012, he again wanted to support his hometown of Bremen. So, he turned an abandoned grocery store into a tourism destination by opening Mill Town Music Hall. Randall wouldn’t allow alcohol to be sold at the venue so that it could be home to quality wholesome entertainment and opened each event in prayer. Acts that have performed at Mill Town include Toby Keith, Loretta Lynn, The Temptations, Amy Grant, Kenny Loggins and the Oak Ridge Boys, just to name a few. It goes far beyond that, however, as the venue has played a significant part of a revitalization effort in the local community.

About R. K. Redding Construction
Founded in 1991, R.K. Redding Construction, Inc. (RKR) is licensed in seven southeastern states and delivers comprehensive construction services and solutions to its clients. RKR is active in many markets, including education, medical, religious facilities, cultural, governmental, and industrial and office/retail. The company philosophy is based on honesty, quality and integrity with the ultimate goal of gaining customer trust and satisfaction. This goal is evidenced by the numerous recognitions and construction awards through the years, including multiple CNA and AGC Safety Awards, Build Georgia Awards, as well as identification by Inc. magazine, Georgia Trend, Atlanta Journal Constitution, and the Atlanta Business Chronicle for growth and best places to work. For more information, please visit www.rkredding.com.