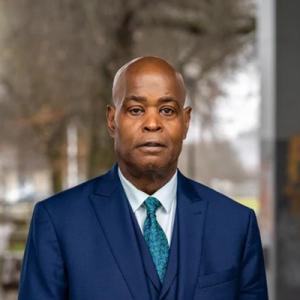 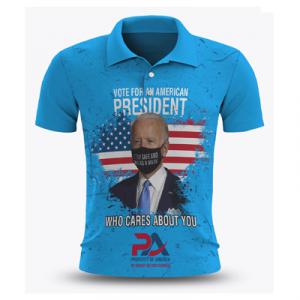 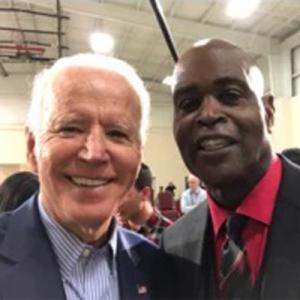 “When I started this in 2017, my goal was to make a difference in 2020,” says Morrison. “Property of America represents the people of America.”

Prior to launching Property of America Morrison was known for inventing one of the first light-switch plates emblazoned with NFL and NBA team logos. Motivated by his desire for change, Morrison combined his expertise in packaging, marketing, sales and distribution with his talent for silk-screening t-shirts to create Property of America and support the campaigns of Joe Biden and all Democratic candidates.

“Everybody wants to point fingers, but nobody wants to offer any solutions to the problems,” says Morrison. “We’ve got to change that. When Trump criticized the great Elijah Cummings and Baltimore, calling it rat-infested, that’s when I knew we were in trouble because he didn’t offer a solution. He just wanted to point fingers. I tell my kids, ‘When you’re right, you don’t have to make excuses.’”

Morrison was a mainstay on the campaign trail, known for his outstanding t-shirts with designs for the moment.

“Candidates are looking for that t-shirt moment,” says Morrison. “When Kamala said, “That little girl was me” in the first debate, within 24 hours they had a t-shirt on the website generating money for her campaign.”

Morrison traveled to South Carolina the night before the primary, which would decide Biden’s chances for securing the nomination.

“I went to South Carolina with a plan to show Joe Biden what I was doing with my merchandise campaign,” recalls Morrison. “I knew I had to get his attention, so I yelled, ‘I traveled 3,000 miles to get a picture with you Joe Biden!”

And Joe Biden turned around.

“I showed him my design: ‘We welcome you Biden, but we miss you Obama,’ and he got a big smile on his face,” recalls Morrison. “He told his aide to get my information. That gave me confidence to know I was on the right track.”

With Biden now sworn into office, Morrison has shifted his focus to improving the lives of black youths through his One Building Project, bringing hope back to the community.

“I raise money through my products to reinvest in my community,” says Morrison. “I want my legacy to be that I always looked out for kids, and not just my kids. My family has lived the American dream, and I want to make sure other kids have that same opportunity.”

Listen to the show on BlogTalkRadio