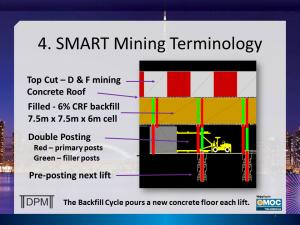 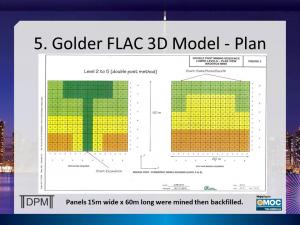 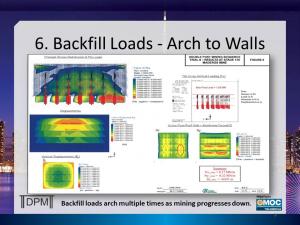 Airplanes must fly above their stall speed to stay in the air. Similarly, SMART mining requires CRF to move only enough to be self supporting but not so far as to overload the roof and posts.”
— Charles Gryba, Mining Engineer, Inventor quotes

TORONTO, ONTARIO, CANADA, April 15, 2021 /EINPresswire.com/ — DPM #2, DPM Mining Inc. Announces the GOLDER FLAC 3D modelling results that were key to creating a new SMART mining platform. SMART coverts the mining of an orebody to a set of linked spreadsheets using 1,000t ore cells rather than a series of stopes and pillars. Detail cost 1 cell and you cost mining the entire orebody. SMART sets up a true expert mining system. Every time you rerun the SMART 3D geological block modelling program with new cost, exploration or production data, the economic value of the remaining ore cells becomes more and more accurate.

The original SMART design concept evolved out of a 1983 Kidd Creek underground mine tour. Gryba observed that the base of a 20m x 30m x 80m high blasthole stope when exposed by mining from below, the 8% cemented rock fill (CRF) only arched about 1 meter. The remainder of the CRF remained stable. Gryba was intrigued. It took a series of 10 innovations to invent a mining method that would support the arch failure. The final innovation, Canadian Patent No.2853584 has just been issued. Australian, US and other mining country patents were previously issued. Patenting a mining system in the US is difficult. The concept has to be unique plus meet 2 onerous conditions, namely a 10 fold increase in both mining productivity and mine safety.

The easiest way to visualize SMART mining is to imagine that an underground orebody is just a large car parkade. The volume of ore between any 4 posts is a SMART cell. Each floor in the parkade becomes a SMART spreadsheet of equal sized cells. Mining proceeds below the bottom level of the parkade. The parkade is filled with cemented rock fill (CRF). However, a SMART cell filled with CRF weighs 800t whereas 4 parked cars weigh only 12 tons. Rock mechanic engineers were adament that the CRF loads would crush the 400t capacity posts. Penoles engineers had searched globally for a new mining method that could improve mining productivity and were intrigued enough to fund a Golder rock mechanics study. See Image # 4 for SMART Terminology

Initial meetings with Golder focused on designing a FLAC 3D model to accurately capture the DPM manual design. Individual components such as floor thickness, post spacing, double posting, diameter of posts vs height, bolting of posts together, compression pads, panel width and so on were discussed in detail. Golder then set up a FLAC 3D model for a 360,000t orebody thus 8 cells wide x 8 cells long x 6 cells high. The top 6 meter lift was mined using 7.5m wide primary and secondary drifts. The lower lifts were mined as panels 15m or 30m wide. Only ¾ of the panel width was backfilled. The model was re run after every 4m long round was drilled and blasted; requiring 45 hours of computer calculation time for each type or strength of backfill. See Image 5 for a plan view of the Golder FLAC 3D model for the 1st SMART lift.

The key findings were:

1. The rigid car parkade design was mined using a 25MPa strength paste fill, then 25, 100 and 500MPa strength CRF. Weak CRF and paste fill both caused the concrete roof to sag 250mm thus overloading the posts. A gap also formed along the top of the fill. The stronger 100MPa and 500MPa CRF also failed but due to high shear stresses near the post/roof connections and secondarily, where the concrete roof went over the edge of an ore pillar. However, post loading dropped as the CRF strength increased. The FLAC 3D model inputs were then adjusted to soften the parkade design. This included bolting compression pads to the bottom of all primary posts plus pouring concrete floors on 250mm of leveled cushion ore.

2. The softer model was then rerun 6 more times as various component elements were changed. Success, the best preforming backfill was 6% binder CRF (500MPa) jammed in place to reduce the void space thus making the CRF stiffer. Post loading on the 1st DPM SMART lift peaked at about 250 tons then dropped to 150t by the 3rd lift, then steady stated. The concrete roof moved less then 50mm on the 1st lift. One pleasant surprise that the FLAC 3D modelling showed was that concrete posts act as 150t capacity rockbolts when surrounded by backfill thus reducing CRF loading.

3. Snapshots of the model load calculations were taken every 15 minutes. Calculations visually indicate that the CRF and post loads arch multiple times. Small arches form over 7.5m wide primary drifts. The small arches changed to larger arches over 15m or 30m wide panels. Loads finally arch to abutments where CRF loading is supported by friction along the walls. The heaviest post loading seen in all 10 runs was always on the 1st SMART lift. See Image 6 for a Section view of the numerous CRF and post loading arches as you mine down 6 lifts.

The FLAC 3D modelling also generated the tensile loads in the floor steel, the heavy shear loads near the post/roof connections, plus the post movement and loading for each lift. This gave DPM the engineering parameters required to detail engineer the Penoles test mine components. The Penoles test mining program opened up 4 cells around a common corner post on the 1st SMART lift. The concrete roof and post stayed intact thus mine proving the Golder model thus confirmed the SMART spreadsheet platform design.

Rather than keeping the SMART technology confidential, 10 EIN press releases will be issued to explain SMART to both the mining and financial markets. Stakeholders include exploration and mine geologists, production miners, retail investors, bankers, fund managers, mining analysts, mine operators, company directors, mine ministers and politicians. To quantify some of the 40+ SMART financial and technical improvements identified to date, 4 well known NA mines will be redesigned using the SMART platform.