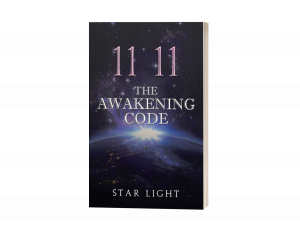 COOKSTOWN, NEW JERSEY, USA, April 26, 2021 /EINPresswire.com/ — The author’s beloved son died unexpectedly on 11 11. It was then that she began being drawn to look at the clock every time it was 11 11. It was as if his death had something to do with triggering her and other family members to look at the clock every time the hands of the clock fell on 11 11. She began to see 11’s everywhere, as well as 111. She began to realize that people all over the world are experiencing the 11 11 phenomena.

Grief can be paralyzing and can cripple the bereaved, especially if the bereaved feels as though they failed their child, as Christine did. At first she was devastated, but the bereavement process was interrupted and overshadowed by some profound paranormal occurrences involving her son’s spirit. The occurrences helped her to heal, in that her son let her know that he was no longer in pain and he was happy and that he was embraced by the light—out of the darkness and into the light. Knowing that went a long way in helping her to get through the ordeal. She knew he was home. She knew that his spirit lived on. She came to understand that the spirit world occupies the same space as we do, but they are vibrating on a different frequency, so we can’t see them. Much like radio waves occupy the same space as we do but we can’t see them. However, we can tune in to the frequency that carries our favorite station.

The synchronistic nature of Seth’s death occurring on 11 11 and the triggering effect it had on her and others close to Seth, as they too began synchronistically being drawn to notice whenever 11 11 was present. It could even be a sales receipt. The definition to synchronicity is meaningful co-incidences. There had to be meaning in the phenomena and it deserved investigation. It’s as if her sons spirit along with the universe led her to unravel the universal message symbolized by the 11s. Her son’s spirit became her guide. She knew that there was a connection between Seth crossing on 11 11 and being drawn to notice 11 11 everywhere. Christine was led to many fascinating sources of information.

Einstein said the language God wrote the universe in was math. Sacred geometry is a perfect example of this as it is found and repeated throughout the universe. Number in itself is math and there is symbolic meaning in each combination of numbers that people are seeing. The 1’s the 111 and the 11 11s. The universe uses math by way of numbers to wake us up. We have been asleep and it is time to wake up. There is a mathematical formula that speaks to everyone. It’s possible to take the last two digits of anyone’s birth year and add it to the age they were in 2011, (the year prior to the ending of the Mayan calendar) and it adds up to 111 for everyone. It’s as if the universe is using this mathematical formula to speak to everyone. We are being alerted to wake up, so we can fulfill the idea of bringing on the age of Aquarius, which began December 21st 2012 at 11 11 AM Greenwich Mean Time. The author makes reference to the song Aquarius. The words describe an enlightened planet where Harmony and understanding, sympathy and trust abound. The author brings meaning to 111. A little wink and nod from the universe to each and every one of us to tell us it’s time to wake up. It is up to us to bring about harmony and understanding symphony and trust.

Waking up involves challenging the status quo. The powers that we have led us into this dystopian reality. We must realize that the earth, the air, the water, and the food have all been compromised for the root of all evil. We have been led like good little sheep to accept war and poverty and suffering. Religion has been used as a tool to promote war throughout history. Religion uses fear as a tool to gain obedience and to prevent anyone from questioning it. Religion demands that we believe in an external god that we pray to hoping he will change things. We give our power to this unseen god. People have been praying for a more peaceful world for centuries, and it seems countless prayers have gone unanswered. Besides what can I tell God that he doesn’t already know. It’s time to wake up to the truth. It is ups to us to take our power back and realize that the temple of god dwells within all of us.

The topics discussed in the book are varied and interesting. She includes some sinister looking photos she took of the artwork that is present at the Denver international airport. These photos support her overall theory regarding the Awakening. She draws connections between secret societies aliens and the sinister artwork at D.I.A.

The author is a licensed massage therapist and energy worker. She is a reiki practitioner, she makes use of crystals and the pendulum. She explains that the pendulum operates under the same principal as the divining rods used for dowsing by people often referred to as Diviners.

If you are curious about the 11 11 phenomena or you are into conspiracy theories like aliens or secret societies, you will definitely find this book intriguing! Grab yours now!

Writers’ Branding is a full-service self-publishing company that provides aspiring authors exclusive access to publicity and a pool of book evaluators and marketing creatives and bridges them to literary agencies and traditional publishing houses.