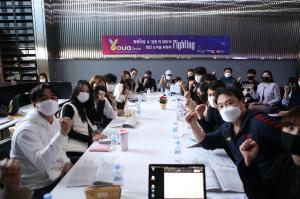 SOUTH KOREA, April 15, 2021 /EINPresswire.com/ — “Jumping & Dumping” is comprised of entertainment and educational elements as it contains both drama and lecture portions. Part 1 of the show will display the “Era of Money” drama, while part 2 will feature cryptocurrency trading game called “Pumping Game”.

For part 1 of “Jumping & Dumping” (Era of Money), the script reading session has already embarked. The session included executive producer Lee Hong Seok and director Hong Jin Chul. The session also included actor Lim Ho, who played the principal character in the Hallyu drama “Dae Jang Geum”. Other actors involved are Kim Myung Soo, Park Yeon Soo, Kang Ye Bin and Yang Seung Won. All the participants gathered together in one place to prepare for the launching and success of “Jumping and Dumping”.

“Jumping & Dumping”, which is scheduled to be released in the early second half of the year, is a cryptocurrency-based variety show (combined with entertainment elements) that will highlight the history of traditional currency and the future of cryptocurrency (which is at its peak at the present time).

By combining entertainment element into cryptocurrency, “Jumping & Dumping” is highly regarded as a must-watch program to understand and learn about cryptocurrency.

To prevent the spread of COVID-19, proper precautions (including sterilization) were undertaken for the script reading session.

“Jumping & Dumping” will start shooting on the 19th of this month at Uijeongbu Art Library. With the goal to upstart another Hallyu wave, it is set to be released on OTT platforms around June.