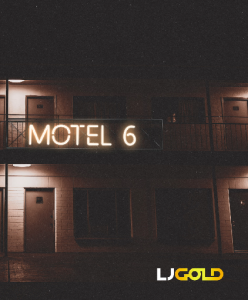 OAKLAND, CALIFORNIA, UNITED STATES, April 16, 2021 /EINPresswire.com/ — A rising new sensation has burst to the scene of hip hop and Rap in commendable fashion, and he is ready to soar and advance to new heights.

LJGOLD’s stunning new single, “Motel 6”, has been turning heads everywhere and it is being deemed as one of the freshest and most profound releases in Hip Hop and Rap in recent times. The music video, complementing the moving single is at the core of this release because it complements the themes highlighted by the song itself and takes the overall message to a newer and higher level.

“I was inspired to create this song from an understanding that there’s people out there who could relate to my story and I wanted to share it with those who are in need of authentic music”, says LJGOLD on the release of his soul-stirring new single.

In its truest essence, “Motel 6” stands put as being a vivid experience for the listener with poetic lyricism and poignant undertones to stir even the most stubborn of hearts. The track itself is a biographical account of LJGOLD’s personal upbringing and the harsh realities he had to face while being homeless with his family. Overcoming the struggles that came with being homeless, LJGOLD’s ambition is to inspire struggle in his young audience by emphasizing on the value of hard work and determination. Released on March 12th, 2021, the song continues to inspire and be talked about by fans of Hip Hop and Rap music everywhere.

Check out his new single and learn more about LJGOLD on the links below and/or reach out via the contact information for interviews, collaborations, and promotional access.

Up-and-coming singer, songwriter LJGOLD is an inspirational speaker born in Oakland, California. Growing up, LJGOLD’s passion was basketball and football, which brought him closer to the raw realities of life.

Life was a struggle for LJGOLD but he still managed to outwork the struggles that come with being homeless and was making his own music by the age of 12 at the Sepia Sound Productions studio. When LJGOLD began working on his first CD, his father established Genesis Sound Productions, a disk making company, to help with the production of the CD. Later on, rather than signing with a major record company, LJGOLD became the CEO of a record company he himself established – Music Forever Entertainment, which also recorded other artists. So far, LJGOLD has released 4 albums: ‘Hood Bizz’, ‘From the Hood to Hollywood’, ‘A.W.N.P’ and ‘Pull Up’.