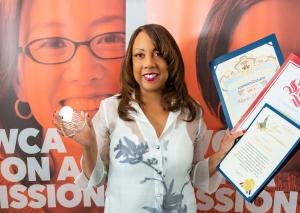 Entrepreneur and Visionary Marie Y. Lemelle was honored with the 2021 Heart & Excellence Trailblazer Award by the YWCA Glendale for her advocacy to end racism and end violence against women. She also received certificates from elected officials. Photo: Ken Jones

Glendale known as “The Jewel City” lost its shine after the city was outed as a Sundown Town and was moved to adopt a resolution of apology for its racist past against any non-white individuals during a significant portion of the 20th century. Photo: Arlene Vidor. 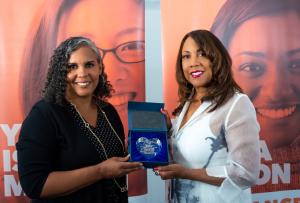 YWCA Glendale Executive Director Tara Peterson and the head of the Coalition for An Anti-Racist Glendale says the resolution is a chance for the city to accept its troubling history and racist exclusion. Honoring Marie Lemelle is part of that change. Photo: Ken Jones

Earthquakes are not the only disaster that rocks California. The City of Glendale was outed as a Sundown Town with the intent to keep Blacks out of its city.

My role as a commissioner on the Glendale Commission on the Status of Women in 2008 was bittersweet. I was omitted from the city’s history as one of the only two Black women in Glendale’s leadership.”
— Marie Y. Lemelle, MBA, a long-time Glendale resident and activist.

GLENDALE, CALIFORNIA, UNITED STATES, April 26, 2021 /EINPresswire.com/ — Unless you were a servant, nanny, or maid, if you were Black, you could not live in Glendale, California. Why? Once lauded as the “fastest growing city in California,” Glendale was a “Sundown Town” that lawfully and vigorously excluded anyone who was not white to remain in the city after 5 p.m. or sundown.

Entrepreneur and Visionary Marie Y. Lemelle is no stranger to adversity or systemic racism. The eldest daughter of Clayton and Theresa Lemelle. who grew up in the Jim Crow era, was born in Los Angeles, California and raised in the San Gabriel Valley suburb of West Covina. Her early life experiences in a then predominately white city and school system could have been a difficult period during her formative years. Fortunately, the wisdom she acquired from her parents, teachers, college years, and international travel prepared her for the veiled discrimination.

As the founder and CEO of the public relations firm, Platinum Star PR, Marie is surrounded and befriended by people from global destinations and all walks of life. When it came to homeownership, it was a no-brainer for her to find a home in Southern California. She chose Glendale, the fourth largest city in Los Angeles County. Marie’s father, a real estate investor and native of Louisiana, who is now deceased, advised her about homeownership and the importance of researching a neighborhood before buying property, kept her focused on crime rate, the school system, and city services but not necessarily the Fair Housing Act of 1968 or the existence of Sundown Towns.

Being a resourceful woman and as a journalist, she avidly conducted her research. Or so, she thought! What she didn’t know is Glendale had a racist past and known as a “Sundown Town.”

Glendale’s white citizens turned to violence and harassment in making sure Black people would not remain in their cities after sundown. It was well known that Glendale wanted to ensure that its white communities remained white. In 1964, Glendale was selected as the West Coast headquarters of the American Nazi Party. Glendale is among the more than many 100 sundown towns in California.

“Glendale, a growing, progressive city, checked off my boxes to call this town, home,” said Marie. “My realtor was a white woman who seemed resolute to steer me away from Glendale and redirect me to Burbank and other surrounding cities. I remember suggesting we look at a premier high-rise condominium in the heart of Glendale and to my surprise the realtor became extremely reluctant and showed me units that did not deliver on my desired view of the Los Angeles skyline.” The building was a showstopper so Marie opened escrow. However, the realtor further insulted Marie by questioning the validity of her ability to afford a home in Glendale.

After some thought to get what she really wanted in a home, Marie’s resourcefulness kicked in and she made inquiries about who was a powerhouse realtor in Glendale. She was introduced to an Armenian realtor who was totally accommodating and showed her a well-appointed unit that was exactly her style. Marie made an offer and forged a longtime friendship with the realtor. To the first realtor’s chagrin, Marie displayed to her a $50,000 check and subsequently cancelled the escrow.

“Many of my family and friends were concerned about my choice because of the city’s racism especially in the 1960s,” said Marie. Aware that the demographics in Glendale are less than 2 percent Black; Marie was already accustomed to being in environments that lacked diversity. Marie has resided in Glendale since 2005.

“Serving my new community always has been a driving force for me,” she said. In spite of Glendale’s racist history, it did not stop Marie from becoming the second Black commissioner on the City of Glendale Commission on the Status of Women, alongside current Mayor Paula Devine. Her later state appointment as a board member for the California State Board of Barbering and Cosmetology has given her great pride in participating in the government system. She is a member of the Coalition of an Anti-Racist Glendale.

“My role as a commissioner on the Glendale Commission on the Status of Women in 2008 was bittersweet,” said Marie. “While I participated in many of the community activities including the city’s YWCA programs for girls and women, my name or contributions were not properly acknowledged nor archived as one of the women in leadership in Glendale. I chose to rise above the racist exclusion.”

Glendale’s history books also excluded the identity of the first Black woman commissioner appointed in 2003. It wasn’t until 2021 that Karen Compton’s name was finally recognized. She was one of the Commission’s founding members. “Karen paved the way for women like me,” said Marie. In 2019, the blatant omissions were brought to the attention of YWCA Glendale Executive Director Tara Peterson who annually honors all women leaders in Glendale.

In 2019, Marie learned that Peterson led the charge with other organizers and presented a game-changing report for the City of Glendale to acknowledge its historical contributions to racism including banishing any person of color from its city at sundown, allowing KKK rallies in the city, and precluding Blacks from purchasing or renting in its city.

On September 15, 2019, the Glendale City Council took the historic step of acknowledging the city’s long history of racism and adopted the Sundown Town Resolution. Glendale is the third former sundown town in the U.S. and the first in California to publicly apologize and adopt the resolution. The influx of a more diverse population, Glendale includes one of the largest communities of Armenians in the U.S.

About Marie Lemelle
She is the CEO and founder of Platinum Star Public Relations, Inc. “Transform Goals to Greatness,” is her mantra. She is a champion for empowering women and vulnerable communities. In support of diversity initiatives and to help clients navigate cultural differences across all industries, Marie earned her certification in Cultural Diversity and Inclusive from the West Hollywood.