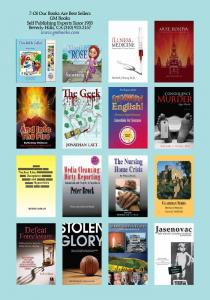 Founded in Los Angeles in 1985 by Anita and William Dorich, the company was formed to offer an alternative to hundreds of rejection letters, and the pitfalls of conventional publishing in which the author surrenders their creative and editing rights. Unlike the usual 10% royalty offered by major publishers, GMBook’s authors receive 30%, 40% to 50% of the net proceeds from the sale of their book based on which of the 3 Hybrid methods the author selects.

Publisher William Dorich brings 20 years of printing experience and a background in commercial photography. As the author of 10 books, 7 on Balkan history, his own unfortunate experience with a major publisher became the impetus for forming the company.

Anita Dorich, Research and Project Director for GM, received a BSW from San Francisco State University and has had postgraduate training at U.C. Berkeley and U.S.C., with a background in professional counseling in the motion picture industry. Her expertise is in assisting and guiding the creative personality. She has overseen editing and production on more than 90 titles.

The mission at GM Books is to provide a supportive environment for first-time and experienced authors who wish to see their manuscripts come to fruition quickly and without the traditional delays or worse, abandonment of a manuscript by a major publisher.

Award winning titles include: Witness to War: Images of the Persian Gulf War for the Los Angeles Times that won a Pulitzer.
Publisher/Author William Dorich has 3 Best Selling titles: Defeat Foreclosure, the Nursing Home Crisis and Jasenovac Then & Now: A Conspiracy of Silence, all three in their 3rd editions;
The Geek By Jonathan Latt, Media Cleansing: Dirty Reporting by award winning journalist Peter Brock and Nuclear Lies, Deceptions and Hypocrisies by Medhi Sarram have enhanced GM’s history. Current titles include The Illness of Medicine by Michael Young, M.D., Stolen Glory by Taps Gallagher and Arise, Rossiya: The Return of Russia to World Politics by Marcus Papadopoulos Ph.D.

From manuscript editing, cover and book design, printing to marketing. GMBooks is a full service publisher.