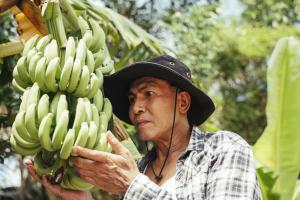 The Global Alliance for Cooperation in the Fight against Fusarium TR4 informed Peruvian authorities that it stands ready to collaborate to tackle the crisis.

SAN JOSé, SAN JOSé, COSTA RICA, April 22, 2021 /EINPresswire.com/ — Following the detection in northern Peru of a disease that has been attacking banana plantations in different continents in recent years, alerts were raised among agricultural authorities in that country and in neighboring Ecuador.

The new scenario is also threatening other countries in the Latin American and Caribbean region – a sizeable player among the world’s major banana producers and exporters. As such, specialists have called for deepening public-private cooperation to tackle the pest that is wreaking havoc on a crop that is key to global food security and the subsistence of millions of small farmers.

Peru’s National Agricultural Health Service (SENASA) announced this month that the Tropic Race 4 strain (TR4) of the Fusarium fungus had been detected in a half-hectare banana plantation in the district of Piura. Immediately, a phytosanitary emergency was declared, which called for strict prevention measures to avoid the spread of the disease to the other banana plantations that cover 170,000 hectares of the country.

In Ecuador, controls and fumigation of vehicles crossing the border were swiftly implemented to prevent the disease from entering the country. Up to this month, the only country in Latin America and the Caribbean where TR4 had been detected was Colombia.

Robert Córdova, Undersecretary of Agricultural Production in Ecuador’s Ministry of Agriculture and Livestock, requested the convening of a regional meeting in Peru, with a view to coordinating actions among countries with economies in which banana plays a key role.

During the III Hemispheric Meeting of Ministers and Secretaries of Agriculture of the Americas, held on 15 April and organized by the Inter-American Institute for Cooperation on Agriculture (IICA) and the FAO, Córdova referred to the need to “establish a joint agenda that allows us to tackle the already existing threat in Colombia and respond to the new alert in Peru, regarding the presence of the Fusarium fungus”.

The Minister of Agricultural Development and Irrigation of Peru, Federico Tenorio, advised that his government is monitoring the situation in the northern region of the country and, in response to the Córdova proposal, promised to contact the ministers of Agriculture of the banana producing countries in the hemisphere “to organize the event in the shortest time possible”.

TR4 is a disease for which there is currently no treatment; it is transmitted through the soil and devastates banana plantations. It is the greatest threat in more than half a century to a crop that is particularly important for vulnerable populations, who obtain up to one fourth of their daily calorie intake from bananas. Even though it originated in Asia, TR4 has been traveling westward and in 2019 was detected in Colombia.

Currently, the only effective way to curb the spread of the disease is to burn the affected areas, which cannot be replanted because the disease may reappear.

With a view to containing this veritable “banana pandemic”, last February, the Global Alliance for Cooperation in the Fight against Fusarium TR4 was established, with the aim of defeating the virus, by preventing its spread, investing in genetic development or educating consumers.

The coalition brings together 25 institutions, with representatives from the private and academic sectors, civil society organizations, government entities and international organizations. Among them is the Inter-American Institute for Cooperation on Agriculture (IICA), which was elected by the other members to serve as the Secretary of the Alliance’s Executive Committee.

The Alliance advised Peruvian authorities that it stands ready to collaborate in planning concrete actions that will enable the countries to tackle the crisis.
The Director General of IICA, Manuel Otero, underscored the importance of establishing the Global Alliance for Cooperation in the Fight against Fusarium TR4 to “save bananas, which are the livelihood and nutrition of millions of people”, and also offered the governments of Latin America and the Caribbean “the support of a powerful coalition that includes technical cooperation, science, as well as the private and academic sectors, in the search for solutions to a disease whose spread has serious economic and social implications, given banana’s link to global food security”.

In a letter to Minister Tenorio, Coordinator of the Alliance Secretariat and IICA Representative in Paraguay, Gabriel Rodríguez, proposed the convening of a videoconference to publicize the work undertaken by the coalition and to provide details on “timely actions that it would be in a position to rapidly implement”.
Scientist, Gert Kema, is the Director of the Laboratory of Phytopathology—the science that studies plant disease—at the prestigious University of Wageningen in the Netherlands. Kema recommended that “the countries where TR4 has been detected should collect data, adopt transparent policies and exchange information with other countries and international organizations, ensuring that field samples are analyzed using the latest molecular diagnostic methods. It is also important that risk maps be designed to identify canals, rivers or flood-prone areas, since these facilitate transmission of the disease”.

He also advised that, “Areas around zones where TR4 has been detected should implement quarantine strategies, in addition to disinfecting vehicles, tools and staff that may have been in contact with the disease. All visitors to banana plantations should change their shoes on arriving and leaving to ensure that they are clean”.
The spread has been facilitated by the monoculture of Cavendish bananas, a variety that accounts for approximately 50 percent of global banana production today, as well as 95 percent of exports markets.

Ronald Guendel, Global Head of Food Chain Relations at the Bayer Crop Science Division, warned that TR4 “is a disease in bananas that spreads rapidly and could decimate plantations in just a few years. Public-private collaboration is vital to seeking solutions and taking immediate decisions”.

He maintained that, “Bayer is fully committed to the banana sector and, through the Alliance, to seeking chemical, biological and genetic solutions to protect this crop that is so important from a financial and food security perspective”.

IICA
Inter-American Institute for Cooperation on Agriculture
email us here

10 Benefits of car service at doorstep