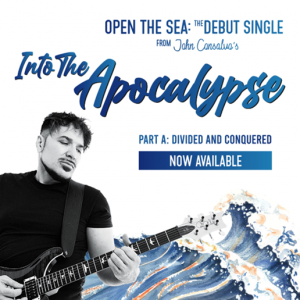 USA, April 17, 2021 /EINPresswire.com/ — “Rome wasn’t built in a day.” It’s a saying that conveys — at its core— the idea that greatness isn’t a short-term project. Instead, it’s one built over a series of days, a series of months, and in one musician’s case – a series of years. For singer/songwriter and fantasy author John Consalvo, greatness means remaining steadfast in the face of hardships, even if they seem insurmountable. Fifteen years ago, Consalvo explored these themes of hope and uncertainty in his breakout rock album: Choose This Day. Filled with Consalvo’s original acoustic beats, the album was a raw and honest introspection by a man learning to overcome the pain and precariousness of life, both on his own and through a close relationship with Jesus Christ.

Fifteen years later, Consalvo is ready to explore the boundary between the sacred and the mundane once more — this time exploring the role of faith in a time where the world seems to be ending, a sentiment shared by many in the wake of the 2020 Covid-19 pandemic. Consalvo’s second album Into the Apocalypse – Part A: Divided & Conquered moves from the realm of self-reflection into the realm of man during the end-times.

The album was recorded at Irongrove Studios and produced by Tyler Mays. “Working and collaborating with Tyler is incredible. For certain, he is one of the true prodigies in the business today. I really appreciate how determined he is when it comes to maintaining the spirit of a song. And the end result makes it all worthwhile.”

Serving as the first half of an apocalyptic journey told from the viewpoint of one person, Into the Apocalypse – Part A: Divided & Conquered is a lyrical and melodic expedition by a man who, while en route to reclaiming his purpose and dreams, is beset by challenge after challenge. “This entire story is one that I believe many can identify with,” says Consalvo. “A man finds himself in a world, not much different than the one we live in now. He knows in his bones that he has a calling or purpose for his life.”

As if paralleling the journey undertaken by John—the apocalyptic prophet and author to the New Testament’s final book, the Book of Revelation— Into the Apocalypse – Part A: Divided & Conquered too delves into the crises of the human condition when faced with chaos. Whereas the Book of Revelation relies on vivid imagery to walk its reader through the end times, Consalvo instead takes listeners on a journey through his distinct hybrid of folk-rock and pop with country undertones that characterized Choose This Day, while setting itself apart with catchy rock edginess that is, proudly, without any filler tracks. The album’s debut single, “Open the Sea”, is described by Steven Azami, the multi-instrumentalist song reviewer from RadioAirplay.com, as follows:

“Open the Sea” from singer/songwriter John Consalvo is a stirring and powerful plea for true love. Featuring a great build-up to an epic song, this country/rock hybrid should have a broad audience appeal. Opening with a slinky acoustic six-string blues, Consalvo’s raspy baritone carries the tune and is soon joined by massive electric guitars and slamming drums. “Where is my soulmate?”, asks Consalvo over top of big southern rock riffs as he comes out of a transcendent bridge and brings this track to a satisfying close.”

The fifteen years between Choose this Day and Into the Apocalypse – Part A: Divided & Conquered is a testament to Consalvo’s belief that despite life’s obstacles, we are instilled with the resilience and grace necessary to overcome them. According to Consalvo, success in this endeavor comes down to what you make of your day-to-day life: a theme which permeates Into the Apocalypse – Part A: Divided & Conquered. “Even with the best intentions, [the man] allows the madness of the day to distract him from that calling,” explains Consalvo. “Ultimately [the man] has to come face to face with the reality that if the focus remains on those distractions-many legitimate, his calling will fade and life will pass him by.”