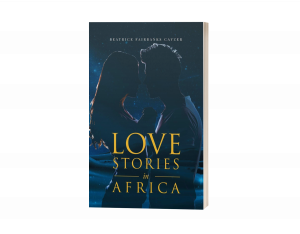 COOKSTOWN, NEW JERSEY, USA, April 19, 2021 /EINPresswire.com/ — A traveler, humanitarian, and a writer, Beatrice Cayzer has witnessed and lived the lives of the people she met in her sojourns. She understood the troubles of their lives, the dangers they have battled, and the desperate measures they have to go through to survive. Through these experiences, Beatrice succeeds in painting a picture of their world that is unbeknownst to many, thus shedding light on their reality that was thought to be fictitious by many. She has written numerous books, some of which are award-winners like The Secret Diary of Mrs. John Quincy Adams and Kennedys in Love. An addition to the long list of published books under her name is Love Stories in Africa, which tells two love stories, each set in a different country and era but delivers the same message—love grows amid tremendous horror and danger.

The first part of the story concerns a young English widow left penniless in Sudan’s worst refugee camps. The second half transpires in 1930’s Ethiopia during the luxury afforded by Haile Selassie’s coronation. The story moves forward as the two heroines fight for their safety and survival in a country too dangerous for a lone woman to traverse all alone. However, love enters their lives amid the horror of poverty and war for power.

Born in a wealthy and influential family, the blood of noble runs in Beatrice’s veins. She is the daughter of a US Ambassador and comes from a very illustrious family who includes two ancestors who helped found Upper Virginia in 1620. Later in her life, Beatrice founded the Cayzer Museum for Children in England and married Stanley Cayzer.

Writers’ Branding is a full-service self-publishing company that provides aspiring authors exclusive access to publicity and a pool of book evaluators and marketing creatives and bridges them to literary agencies and traditional publishing houses.